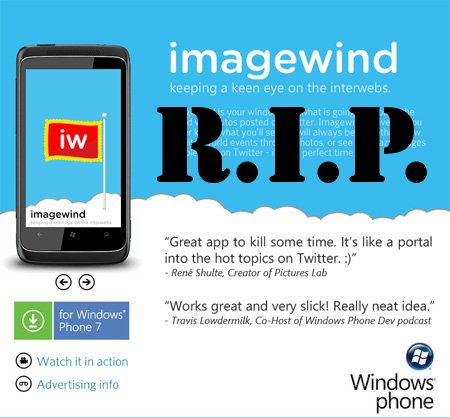 After being in the Windows Phone marketplace for just two weeks, I am very sad to say that Imagewind for Windows Phone is going to be pulled from the marketplace tomorrow. If you are reading this on March 30th, then you can act quick and grab it before it is gone.

I had a concern all along that Imagewind might not make it through marketplace approval, which is why I submitted a simple beta version of it in late February to test the waters. On March 3rd that version of Imagewind was approved, and I immediately doubled-down and invested more time into making Imagewind hot. After two straight weeks of late nights, and spending a few hundred bucks on design and website creation, Imagewind was re-submitted and approved on March 16th.

Since its release Imagewind has been doing great in the marketplace with 17 reviews and an average rating of 4 1/2 stars in just two weeks. In fact, just today Imagewind broke over 1 million images displayed across all Windows Phone users.

About 10 days ago I submitted an update to Imagewind which added pinch/zoom support and search abilities. After 10 days of no results from the marketplace approval team, I started to worry that maybe the search ability was pushing the boundaries a bit too far - I didn't however expect to get a notice this afternoon that the app was going to be pulled from the marketplace altogether:

Imagewind - app unpublish request
[..] While the images shown are dynamic, per your app’s disclaimer, a portion of the images’ content is too graphic for the app to be permissible in Marketplace. In order to be permissible, there would need to be a content filter before surfacing images since users are not querying a specific type of image and are rather pushed to them.

Given this, we ask that you unpublish your app within one business day until you are able to modify your application to comply with the certification guidelines.[..]

Thank you for your understanding in the matter, and we will hope to see an updated version soon.

Since Imagewind is entirely based on live unfiltered images from Twitter, there is no chance of me ever being able to comply with the policy team's request short of hiring a team to monitor and filter images 24/7. This rejection draws the line in the sand for what is and isn't allowed on Windows Phone, and it paints a distinct difference between what is allowed in the iPhone app store and the WP7 marketplace. 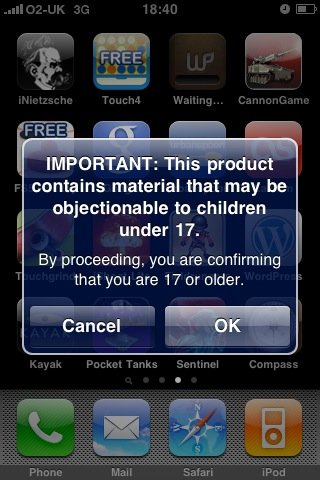 The screen above shows a common warning in the app store for iOS devices. Anytime an app brings in data from the web which could contain questionable content, you have to approve this warning. It is a bit ridiculous in that all Twitter clients, the Opera web browser, and even Wikipedia apps all have to show this warning - because they could show questionable content.

The Windows Phone marketplace doesn't have a warning like this yet, so I created my own shown every time Imagewind launches:

It is worth noting that the iOS marketplace would in fact allow Imagewind, and has another similar app already called Pingwire (which has apparently been covered by CNET, BBC, and The New York Times). Unfortunately as of now, such apps aren't within Windows Phone marketplace guidelines.

You can find the XAP for Imagewind v1.1 attached. If you are a developer and can side-load apps please continue to enjoy it. Hopefully the ads served up by continued usage can help me recoup my investment which is now all for naught.

It should be noted that I'm not totally ticked. I understood in the beginning it might be rejected for just these reasons. My biggest complaint is that it was approved twice before, and it is only now being rejected (and removed) after adding new features via an update. Had it been rejected on the beta run in early March I would've cut my losses then - that's why I submitted such an early version.

Please leave a comment on your thoughts regarding this policy. Obviously there is still room for the Windows Phone marketplace to improve, and maybe this can be one place to push for some changes.

[Update 3/31/2011 1:14pm EST]
I emailed back and asked for an extended grace period while the policy team and Brandon Watson talked about the app being removed. I am hopeful something good will come out of their discussions - like a way to get Imagewind back into the marketplace. Until I hear back from them Imagewind will stay available. Stay tuned.

[Update 4/1/2011 11:45 EST]
Unfortunately I got notice tonight that after further review the marketplace policy team are sticking with the decision to remove Imagewind from the marketplace. I only got about 60 minutes of notice to remove it myself, which of course happened at 7pm EST on a Friday, so it was removed for me, which means all 25 5-star average reviews are now gone forever. I guess if the app won't see the light of day in the marketplace then that doesn't matter much anyways. For what it is worth, I still haven't been contacted by Brandon Watson, so I don't really have any more insight as to if I have any further options here. My best bet now is that until marketplace regulations change, Imagewind won't be allowed in the marketplace. Perhaps most disappointing is that it could have been released in the iOS or Android marketplaces - but for now it can't be in the WP7 marketplace.

I guess for now Imagewind will continue to reside at imagewind.net in an online version, and folks who can side-load apps can continue to grab the .xap file attached to this post (and eventually at imagewind.net/wp7). I'm hoping that despite this rejection, Imagewind for WP7 will continue to thrive with folks who grabbed it before it was removed, and from folks willing to side load it. I guess now I'll start the journey of getting Imagewind on other mobile devices.

A Screencast on Recent Changes to ImageWind.Net

It's been almost a month since I announced ImageWind.net, my current personal Silverlight project. I've really been enjoying working on Image Wind over the last several weeks and I wanted to put together a video showing off what Image Wind currently looks like.

A friend on Twitter turned me on to Screenr.com this week, and that is what I used to record this screencast. I would highly suggest checking out Screenr.com if you want to record something on your computer quick. It records the display and audio with no install (so long as you have Java installed) - really cool.

I'm trying to encourage people headed to PDC 2009 next week to post a bunch of pictures from their phones on Twitter so they can be watched in ImageWind. If you are going to post any pictures from PDC be sure to include "PDC" in the tweet text. Here is where you can find images posted with PDC in the text:
http://www.imagewind.net/index.html?search=pdc

I still have about 20-30 items on my TODO:: list for Image Wind - some of which are pretty big changes. I hope you are checking out ImageWind.net every once and a while and staying on top of the changes being made via the change log. You can also follow @ImageWind on Twitter to stay on top of current work and to see some interesting images discovered via ImageWind. 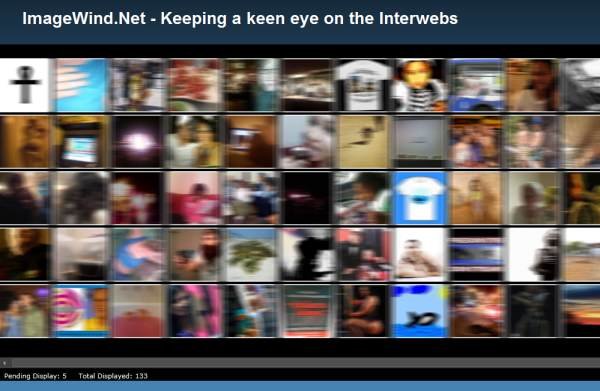