In case you didn't know, there's money to be made in mobile. Not necessarily by mobile developers like you and me, but most definitely by the app stores that collect their 30% off the top. With Apple posting revenue in the billions from their app store, it's no wonder folks like Amazon and Samsung have entered the app store business as well. Who has been notably absent is Facebook.

Obviously a mobile app store probably isn't something that would make a lot of sense for Facebook, but with Facebook now getting more visits from mobile than desktop, it would only make sense for them to try and capitalize off all that mobile traffic - and it looks like they have found a pretty smart model.

I came across this article on Business Insider last week that suggested that Facebook would now start to offer in-line mobile ads specifically for marketplace apps - and essentially get paid per app download. This is quite a genius plan actually. With brands spending several dollars per click for Google ads, of course they would pay a few bucks per download of their mobile app.

According to a prominent Facebook critic, an executive said that the social network could make a billion dollars a year by collecting a toll on installations of apps.

We've talked to a few different experts in the advertising business who say that developers will typically pay anywhere from $1 to $3 to get a consumer to install an app.

Last night I just so happened to catch one of these new mobile app advertisements. Unfortunately, it didn't exactly work (it kept taking me to a 403 error), but it did work in catching my eye - especially the call to action "Install Now". 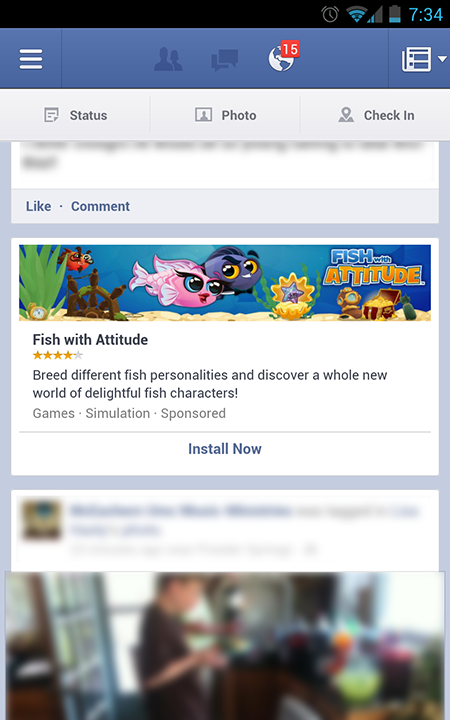 I'm very curious to see how the competition for this ad space plays out. Obviously big brands have big pockets, so there will be plenty of competition in that space, but what interests me more is how targeted these ads will be or might become. Obviously Facebook only gets paid if the ad gets clicked, so there should be good hope that an indie gamer might get served an ad for the latest indie game, and not get served an ad for Kohl's or something similar. I can only hope that there is room for smaller app shops like mine to promote their apps to Facebook's ~1 billion users.

This is a potentially huge business, and Facebook isn't the only one gunning for the so-called appvertising market. For example, Twitter has tweaked its mobile ads in specific ways that help drive app installations, like targeting ads based on the smartphone operating system a user has.

As I read recently, the problem with casual gamers is that they don't actively seek out new games to play like hardcore gamers - Facebook getting into the mobile ad space may just help fix that issue.