Line Diet is Back - and Open Source! 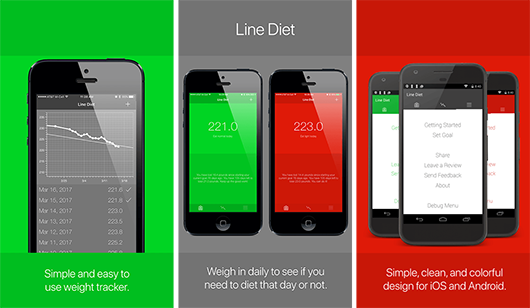 Get it now, or check out the project on Github

Back in July of 2013 I released an app called Line Diet for iPhone written using Xamarin.iOS. A few years later an iOS update broke my custom implementation of entering a weight, so the app stopped working (as I had no time to fix it), and I pulled it from the App Store. Since then I've intended on re-releasing it (and even had a personal version with nearly complete Apple Watch support), but since this was more of a personal interest app, and not one that was generating revenue, it sat on the back-burner for the last year or two.

Today I'm happy to announce that not only is Line Diet back, but it is now available for both iOS and Android. On top of that, it is now an open source project on Github. It is written in C# and XAML using Xamarin.Forms, Prism, and OxyPlot. While the app is pretty straight forward, it has some pretty neat features as well (dynamic color theming, MVVM architecture, graphing, etc.). My hope is that it serves as a good sample app for folks looking to learn MVVM based mobile app development using C#, Xamarin.Forms, and Prism. It has plenty of potential extension points as well, so feel free to submit a pull request if you have interest in adding to the project.

You can find out more about Line Diet and find relative app store download links at LineDietApp.com.

Official promo video for Imagewind on iPad and iPhone

This is essentially the re-birth of Imagewind. After Imagewind was banned from Windows Phone I became quite disheartened that it would never again see the light of day in today's marketplace-based distribution networks. You see, Imagewind is a bit risque - it displays unfiltered images from Instagram, Twitter, and Flickr - and some people post some crazy things to those social networks. What's neat about this sort of re-birth of Imagewind is that it largely shares a similar code base to the original Silverlight and Windows Phone versions - thanks to Xamarin MonoTouch. Given how intense this app is in it's processing and image displaying, I think it is quite a testament to that platform.

What I like about Imagewind isn't the bad things you may see, but the real-ness of what you see. There is nothing closer to reality-TV in an app than Imagewind. You can see what people are eating for lunch, while at the same time see photos from sporting events or war-torn countries. I actually found out about the earthquake in Japan in 2011 while watching Imagewind at 1am. That's also how I found out about Brittany Murphy's death in 2009. It becomes obvious when world events are happening, because that's what people are sharing photos of on social networks. Good recent examples to watch have been Obama's inauguration and the Super Bowl a few weeks ago.

There's something special about being able to visually watch world events unfold through photos people share. Some people when they see Imagewind for the first time say "hrm, that's cool", and then move on. While others watch it, and can see how engaging visualizing social exchanges around the world can be. I hope you'll try it out! Find download links and more at Imagewind.net.